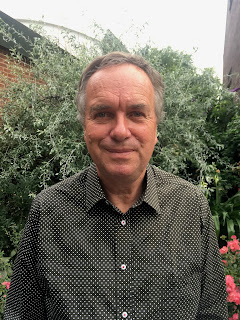 My field of expertise is housebuilding, selfbuilding and low energy construction in the UK. I write about houses, I talk about them, I answer people’s questions about them  and occasionally I get to build them. If you want to know more, read on....

Born 1953, Cambridge, England. Still lives there. Educated: Christ College, Brecon, and Trinity College, Cambridge. 3rd Class degree in Social & Political Science in 1974. A gentleman’s degree in a completely useless subject. But hark! I had hair, and I had attitude. It was 1974 and capitalism had to be uprooted.


So I worked in various alternative-style enterprises from 1975-85, inc Arjuna Wholefoods, Cambridge Learning Enterprises and Cambridge Building Collective. I was a founder member of CambridgeFriends of the Earth and was also one of the original organisers of Strawberry Fair (started 1974, still going strong.) During this time, I was living a typical 1970s hippie lifestyle and got involved in communes and co-operatives and also the nascent green building movement. The roots of much of the sustainable building movement which we read so much about today were sown back then, with the opening of the Centre for Alternative Technologyand the publication of magazines likeUndercurrents, which I occasionally contributed to. I worked with the Vales, the green architects who were still living near Cambridge at that time. I decided that if I was going to be a green builder, I’d better know a bit more about building and I applied and got on a Government sponsored TOPS course to learn Carpentry & Joinery for six months in 1982 - I swear it was the best bit of education I ever had.

Despite our group’s very green and alternative leanings, there simply wasn’t very much of that sort of work around in Cambridge in the 1980s and slowly we found ourselves competing more and more with regular building firms. They all thought we were very strange — the hippy builders — but we slowly but surely began to win respect from the straight building community and I begun to understand life from their perspective and learned to respect them as well. The “Them and Us” stuff gradually faded away, and I realised that it was indeed a noble aim to be a good builder, not just a different one. I was growing up.

The green politics gradually evaporated too: partly this was down to life experiences, but there were a number of interesting booklets doing the rounds at the time questioning all of our alternativist assumptions. One I remember clearly was called “That’s No Way to Run a Railroad”, subtitled The Tyranny of Structurelessness, which neatly outlined the inherent uselessness of trying to run businesses by committee, which was a big part of being in our hippy building firm. I was convinced and by 1984, I had stopped believing we were all doomed and I could see the point of economic growth and I found myself wanting to make some money.  I started buying privatisation shares. I was one of the 80s Sids. I also started renovating houses and bought and completely gutted a house in central Cambridge.

In 1986, I started a property development company called Complete Fabrications with another ex-collectivist called Robin Gomm. We built a small number of flats, houses and barn conversions in and around Cambridge, but came badly unstuck in the 1989 recession and spent the next three years unpicking the mess.


In 1988, in the middle of all this, I married and became the father of three sons in four years. Part of the unpicking process involved building a house for us all on a plot we couldn’t sell, in Weston Colville, one of the most obscure villages in Cambridgeshire. It turned out to be a life changing experience. We designed the house during late 1991, built it in 1992 and moved in just before Xmas that year. Despite having built a number of houses by now, the process of selfbuilding was surprisingly difficult and posed a lot of questions that I could only vaguely guess the answer to. I decided that now was the time to put my expensive education to use for the first time and write something down.

I started the book-writing project by approaching a couple of publishers to see if there was any interest in such an idea. “Absolutely no way,” said the first, “it’s far too specialised.” “Absolutely no way,” said the second, “anything with prices in will date far too quickly.” If anything, these responses just strengthened my resolve. I react well to being told I am crazy. I decided I would self-publish and concentrate on selling the book directly by mail order and at selfbuild exhibitions. First I had to write it.

All I had in 1993 was a series of notes on anAmstrad PCW plus masses and masses of price data in the office. It seemed a mammoth task to turn it into a readable book, especially with a young family to look after, a new house to finish off and an existing business to keep going. Looking back on it, I am not too sure how I got it all from an idea to a physical book in just 18 months with all that going on in the background. As I said, this book is a by-product of recession and recessions make you work that much harder.


My first print-run was tentative, a few hundred run out on a DocuTech machine, a sort of upmarket photocopier. Had they sat around for ages, I would have written off the whole project to experience and gone back to join Robin in the building business. But the first edition sold. They sold off the page in the selfbuild mags and the sold by the hundred at a selfbuild exhibition at the NEC. Within a couple of months I had to do a reprint and theHousebuilder’s Bible was on its way.

And ever since then there has been what I would describe as a very slow snowball effect going on.  For the first couple of years I tried to get a presence in the major bookshops, making several appeals toWH Smith and Waterstones to stock my baby. But they were not in the least interested in such an amateurish product without a major publisher or a TV series behind it. Despite this, the sales kept climbing and the book sold very well through the selfbuild magazines and also through some professional titles as well. It surprises many who think of it primarily as a selfbuild title that around half the sales are made to ‘professionals’  — small builders and tradesmen, architects, surveyors, even estate agents. The fourth edition, the Millenniumone, finally broke through into the retail market albeit via Amazon.co.uk, the internet bookseller, whose sales depend to a large part on customer reviews. The Bible had some good ones —  and no, I didn’t write them myself! During 2002, theMillennium edition was regularly appearing in the top 100 of all Amazon’s book sales and remains one of their top five Home and DIY titles.

I have also turned my hand to a little journalism. Michael Holmes, the long time editor of the leading selfbuild magazineHomebuilding & Renovating, was an early fan. He asked me to write for his magazine in 1996 and I have been contributing pieces to it ever since. Journalism has also improved my skills as a writer — I don’t waffle as much — and in 2001 I picked up my first, and as yet only, gong, Residential Property Writer of the Year, at the Halifax Laing Homes Press Awards.


The twenty-first century has continued along a more predictable trajectory, writing articles, blogging, updating my book and delivering talks to would-be selfbuilders. What I had stopped doing was building and this began gnawing away at me. A costly divorce in 2007 made that even less likely but in 2014 my fortunes changed for then better when I got together with Mandy and we embarked on a new build home in central Cambridge, a rare find in itself. We completed the house in 2018, and published edition 13 of the Housebuilder's Bible in 2019.

You will find my writing most months in the pages of Homebuilding & Renovating. Or twitter @slopingsite, named after Brinkley's Slope Law, detailed in Chapter 6 of the Housebuilders Bible. I was once a prolific blogger at House 2.0 but twitter seems to have made blogging redundant. Or maybe just much more concise.

Currently enjoying being lockdown in the CV-10 pandemic in April 2020.
Home
Subscribe to: Posts (Atom)